Malaga’s vinegrowers and wineries that want to join an appellation (D.O.) have several options to follow, for instance they could join D.O. Malaga by following its regulation. Another option could be joining D.O. Sierras de Malaga (Malaga Mountain Range D.O.) which has a different regulatory structure. But this two wine regions are overlapped, the regulation is different while the land surface is exactly the same. And if they are in Manilva or Axarquia’s subzones, they could join the D.O. Pasas de Malaga (Malaga Raisins D.O.) and obviously this is focused on table grapes (not for winemaking). One more option is joining two D.O. or even the three of them by applying with different plots (vinyards) to different appellations (to join the three of them they  should be within the subzones we mentioned before). This means that the Regulatory Counsil that controls the three D.O. will check or supervise a plot depending on which D.O. it has been assigned.

D.O. Sierras de Malaga makes more conventional wines (whites and reds) whilst D.O. Malaga makes the really traditional wines within this part of Spain. We will dedicate a complete chapter to understand them but unbdoubtely the best way to approach to Malaga´s wine is by tasting. The two D.O. cover 3,800 ha (9,390 acres) and produced 2.3 million litres in 2015. The main varieties are Alexandria Muscat and Pedro Ximenez. 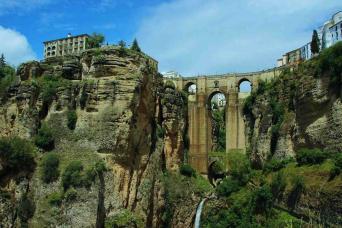 Wine Tour to Ronda from Malaga with wine and gastronomy in Ronda to... 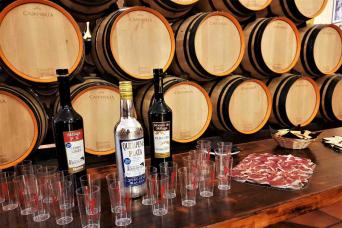 Phoenicians traders contacted Malaga and Cadiz almost 3,000 years ago so this became the beginning of a very long and successful wine-producing story. Phoenicia was located where currently Lebanon is, so these excellent sailors and traders brought the vine from those areas where wine was ‘discovered’, a circle-shape surface located where nowadays is Armenia, Georgia, eastern Turkey, western Iraq or Iran. Later on, the Greek sailors, as well as Romans and Moors kept the local vinegrowing activity (in the last case, as a result of the Koranic prohibition, Malaga’s grapes were consumed as a berry and not as a wine). After ‘Reconquista’, Malaga´s reputation grew unstoppable until XIX century when almost 50% of the production was exported worlwide from Malaga’s harbor. Then the dream came to an end due to phylloxera plague’s attack. Since then Malaga wines have been recovering little by little in order to get it well-deserved recognition in 1932 when it become a D.O. From now on you will take a look about how complex and attractive the very unique world of Wines from Malaga and Sierras de Malaga is. Enjoy!

There are five geographical sub-areas within the D.O. Malaga and D.O. Sierras de Malaga (remember the two of them are overlapped): Axarquia, Costa Occidental-Manilva, Montes, Norte and Serrania de Ronda.

Axarquia is located in the most Eastern part of the wine region and it goes from the Mediterranean sea into the mountains. Thus vinyards are often situated on very steep hills that could reach slopes by 50-60 percent where machines are not able to work. This issue forces vinegrowers to work in very hard conditions specially when harvest time; even nowadays it is not unusual to see mules bringing the grapes from the vinyards into the wineries. Despite these topographic difficulties, Axarquia is the main wine-producing subzone within the province of Malaga. In here Alexandria Muscat has been produced for more than two thousand years. Another starred grape is the indigenous Romé (white and red versions) that is perfectly adapted to the environmental subtropical conditions such as a mild weather with lack of rainfalls but a significant presence of moist due to the Mediterranean Sea proximity. The whole area is famous because of its raisins (‘pasas’ in Spanish); the vinegrowers sun-dry the muscat berries on ‘paseros’, the surface where they spread the grapes to transform them into ‘pasas’. When the clusters are ready, the raisins are destemmed and traded.

The wines from Costa Occidental have a tought competitor… bricks! The proximity to the Costa del Sol forced vinyards to move backwards and uphill where the land is not disputed so far. Highways, Golf Courses, Malls and Condominiums invaded the flatter areas near the coast but this does not mean this war is lost: wine varieties, table grapes and raisins are produced still there, facing the Sea at a higher altitude or deeper inland. The main variety is (as usual) Alexandria Muscat, but also Cabernet Sauvignon, Merlot, Syrah and Tempranillo have an increasing presence.

Malaga’s municipality is surrounded by a steepy range with very diverse vinegrowing conditions, which allows wineries to make a wide range of options such as still wines (red, rosé or white wines), Sweet Natural Wines, liqueur wines such as ‘Pajarete’ style and/or sparkling wines. Two famous local brands are Antigua Casa de Guardia (do not miss their old tavern in Malaga) and Quitapenas. The main varieties are Pere Ximen (Pedro Ximenez) and Muscat.

Doradilla grape variety is indigenous from this subarea, although Pere Ximen (Pedro Ximenez) is also very common. Unlike those previously mentioned growing areas such as Axarquia or Montes ‘Mountains’), the vineyards are planted upon fertile soils and on a completely flat surface. The climate is continental due to the Sea influence cannot reach this higher inland zone.

The ruins of the Roman city called ‘Acinipo’ are located near Ronda and ‘Acinipo’ means ‘wine region’, so this range around Ronda has been involved on wine production since the very old times. Almost half of the wineries belonging to the D.O. Malaga and D.O. Sierras de Maraga are situated in here. Because of its altitude over 700 masl (2300 ft) this land has been focused more on still wines than on the traditional ones. As a result of that, Chardonnay, Cabernet Sauvignon, Merlot, Syrah and Tempranillo became lately more and more common. Ronda is one of Spain´s most beautiful towns. We recommend you enjoy a Ronda wine tour, either from Malaga or from Ronda itself, to enjoy both Ronda and its wineries and wines.

Malaga wines could be classified attending to if they are fortified or not:

a)      Vinos de licor (‘Liqueur Wines’) and among them there are the Vinos Dulces Naturales (‘Sweet Natural Wines’).

These wines should be made from Pero Ximén (Pedro Ximenez) and/or Alexandria Muscat but it is also allowed using less than 30% of Doradilla, Lairen and Romé varieties (as a total, not each one). These are fortified wines so this means it is possible adding concentrated must or made-from-wine distilled alcohol which rises up the limit for alcohol volume, by reaching a value between 15% and 22%.

As we said, there is a type of ‘Liqueur Wines’ considered ‘Sweet Natural Wines’. These are fortified sweet wines (their sweetness is natural, not their alcohol content –they are fortified–) because it is also possible to produce fortified semisweet, semi-dry or dry wines and all categories are included into the main ‘Liqueur Wines’ one. These Liqueur wines could ‘suffer’ a transformation process by adding ‘arrope’ (boiled concentrated must) which also changes the final alcohol content and alterates the wine color. More information available at point 4.

b)      Vinos Naturalmente Dulces (‘Naturally Sweet Wines’ or unfortified), from at least 13% alcohol volume, they are made from over ripended grapes and the resulting alcohol content has to source exclusively from the fermentation process, so these are not fortified wines.

All these wines need an oak-ageing process but those wines made from Pero Ximén (Pedro Ximenez) and/or Alexandria Muscat that could be considered also a ‘Málaga Pálido’ without an oak-aged period:

Once we know there are two main categories for D.O. Malaga wines, the fortified and the unfortified, we could deploy a second classification attending to the wine sugar content:

- Lágrima (‘Tear’): Made from unpressed must, just the liquid that grapes release. If they are aged for longer than 2 years they can be called ‘Lacrimae Christi’.

-  Pajarete (‘Little bird’): This is an ambar liqueur wine (fortified) which has a total sugar content between 45 and 140g/l. It is an oak-aged wine that is made without any addition of arrope.

It will be possible to label under one of these two variety’s name when at least 85% corresponds to the mentioned variety. Remember it is also allowed using less than 30% of Doradilla, Lairen and Romé varieties (as a total, not each one).

The older these wines are the darker they get and this goes from a Dorado to a Negro. So a D.O. Malaga wine is darker because of its ageing process (this is common to any white wine worldwide) and also because they could be sourced by ‘arrope’ (and this is a very unique and local process from D.O. Malaga. Arrope is a boiled concentrated must, so its sugar content is really high. In Central and Southern Spain this arrope has been historically a popular dessert that looks pretty similar to a fluffy quince gelatine or jelly.

- Dorado or Golden (*both names are recognised by the D.O., the Spanish or the English term, due to the important historical trade of these wines with the British Isles): It is a Liqueur Wine made with no addition of arrope or it could be also a Naturally Sweet Wine (unfortified) that has been oak-aged.

-  Rojo dorado or Rot gold (*): It is a Liqueur Wine made with a 5% arrope-added in volume and subjected to ageing process.

-  Oscuro or Brown It is a Liqueur Wine made with a 5-10% arrope-added in volume and subjected to ageing process.

-  Color: It is a Liqueur Wine made with a 10-15% arrope-added in volume and subjected to ageing process.

-  Negro or Dunkel (*): It is a Liqueur Wine made with more than a 15% arrope-added in volume and subjected to ageing process.

-  Dry Pale or Pale Dry (*both names are recognised by the D.O., the Spanish or the English term): This is a non-arrope-added Liqueur Wine that contains less than 45 grams of sugar per litre.

-  Pale Cream: This is a non-arrope-added Liqueur Wine (fortified) or a Naturally Sweet Wine (unfortified) that contains more than 45 grams of sugar per litre.

-  Dulce Crema or Cream (*): This is an ambar oak-aged Liqueur Wine that contains between 100 and 140 grams of sugar per litre.

-  Sweet: This is an oak-aged Liqueur Wine that contains more than 140 grams of sugar per litre. The color ranges from ambar to black.

-  Vino maestro (‘Master wine’): The must is added with an 8% by volume of made-from-wine distilled alcohol even before fermentation starts. Due to this fermentation takes place very slowly and is stopped when alcohol concentration gets 15-16% by volume, leaving more than 100 grams of unfermented sugars per litre.

-  Vino tierno (‘Tender wine’): Liqueur Wine made from very over-ripened sun-dried grapes. The resulting must gets over 350 grams of sugar per liter which is really high… and remember the fermentation stops when they add the made-from-wine distilled alcohol. Therefore the final wine is pretty high in both alcohol and sugar content.

D.O. Sierras de Málaga covers ‘still wines’ production with an alcohol content between 10 y 15´5 % alc and a sugar content inferior to 12 gr/l. As usual it corresponds for still wines, they could be white, rosé or red wines.

Classification according to the aging process:

The wineries from the subarea known as ‘Serrania de Ronda’ can label under this name when their wines are made with 100% grapes from this subarea and some elses additional requeriments.

Wines from Málaga. Types of wine in Malaga Grapes, wineries, history of the wines in Málaga and its region