Surrounded by vineyards, the Finca los Arandinos hotel in Rioja it is a modern building known for its very original design which offers luxury accommodation at a winery! Each of the hotel rooms has balconies offering beautiful views over the vineyards of La Rioja. The rooms are luminous and enhanced by the winery hotel’s contemporary design. The hotel has a spa, which can be enjoyed by guests needing a rest after a full day’s tourism in the region. The spa offers a pool, a hammam, a sauna, and a jacuzzi

The Bodega Finca de los Arandinos Hotel, is located near the city of Logrono (14 kilometers) and at 30 minutes drive to Haro or Laguardia.

South of Logrono, Entrena has a small population of barely 1.500 inhabitants. Most of its land is used for cultivation. The Church of San Martin and the Convent of Santa Clara are two places of interest. Entrena, in close proximity to Logrono, is a good starting point for the wine and Monastery Route we propose in our Route selection in La Rioja. The Monasteries of Yuso and Suso, both World Heritage sites, are located in the San Millan de la Cogolla village, in the valley of the Cardenas River. The Monastery of Suso was the first one to appear, it originates from the caves where the hermit disciples of San Millan lived in the 6th century. Entrena is also relatively close to Najera, Fuenmayor, and other touristic attractions.

From Finca de los Arandinos you can take advantage of the proximity to go and enjoy the bars and taverns on Laurel Street in Logroño. Entrena is a good place to include in a short trip of La Rioja, due to its closeness to Logrono and other very interesting places. The stretch of St James’ Way which goes through La Rioja is very close: you will find the Pilgrims’ Hospital in Navarrette, the San Anton Hill, which offers a panoramic view of Najera and the Najerilla river valley and the Monastery of Santa Maria la Real where a long time ago the Pilgrimage to Santiago was promoted.

GET THE BEST DEAL!

What we like most about Finca los Arandinos hotel

The hotel Finca de los Arandinos  is one of our favorite options to enjoy a trip to La Rioja. It is located at 14 kilometers from Logroño and it is also very convenient to visit Haro, Laguardia, San Millan de la Cogolla or the famous Monasteries of Suso and Yuso. The hotel is situated on a modern winery estate and has very few rooms. Restaurant Service, Bar, Garden, Terrace, Sauna, Golf Course (less than 3km away), Spa, Hiking.

GET THE BEST DEAL!

Winetourismspain participates in different affiliate programs to offer the best deals for some of the products we do not commercialize but which have been researched by our team of local experts. We aim at recommending the best deals of travel services we believe offer a good experience. By booking through these affiliate links you get the best deals available and contribute to support the content on this site.

Other wine hotels in Rioja

There are excellent hotels in Rioja to enjoy wine country. You can find below some alternatives that may suit your taste or budget better 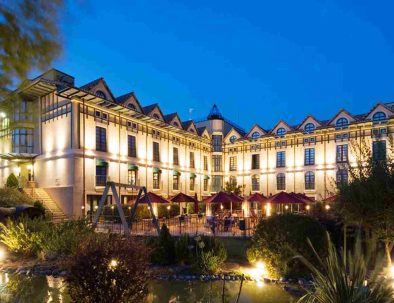 The 4 star Villa de Laguardia hotel is one of the best options to enjoy in Rioja. This hotle in Laguardia has one the most complete spas at a hotel in Rioja. it offers excellent value, a very good location 5 minutes walk to the center of Laguardia. … Read More 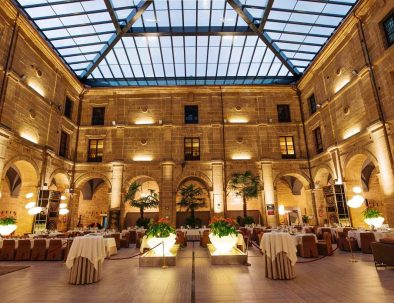 Los Agustinos hotel in Haro is located in a spectacular ancient building that has all the modern touches of a luxury hotel. Previously an ancient convent and 19th Century Spanish military assemblage, Los Agustinos welcomes visitors today with its impressive cloister, which has been renovated with a beautiful glass dome ceiling and modern décor. With no doubt Los Agustinos is one of the most elegant hotels in Rioja. … Read More 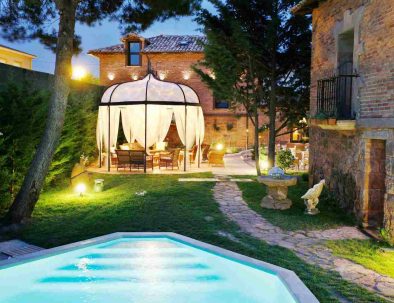 One of Rioja´s most romantic hotels. Casona de las Amas is located at a beautiful XVII Century Palace hotel. You will stay a fantastic small boutique hotel, with swimming pool. Azofra is on the Camino de Santiago route in Rioja, so you will be able to enjoy a bit of trekking in El Camino! … Read More 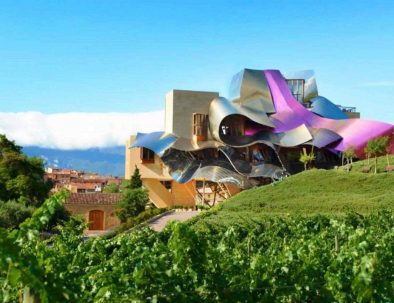 This is Rioja´s most luxurious hotel designed by Frank Gehry (also architect of the Guggenheim museum of Bilbao) You will enjoy accommodation at this amazing hotel, breakfast, spa circuit and a tour to the Marqués de Riscal winery. You will enjoy the most exclusive hotel in Rioja Alavesa and stay not far from Laguardia, Logroño or Haro. Learn about wine, enjoy Riojan gastronomy, and relax at the spa of the hotel located in the small town of Elciego. A very special hotel for your stay in Rioja … Read More